Every year, over 240,000 men are diagnosed with prostate cancer. According to the American Cancer Society, prostate cancer is the most frequently diagnosed cancer among men in the United States and is the second leading cause of cancer related death in this group.

Galeterone is a proprietary small molecule, oral drug for the treatment of CRPC that disrupts androgen receptor (AR) signaling, the key driver of CRPC, via a novel 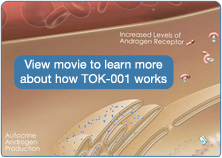 Tokai is currently evaluating galeterone in a Phase 2 study, ARMOR2, in patients with CRPC as part of the ARMOR clinical development program for galeterone. Data from a Phase 1 proof-of-concept study, ARMOR1, presented at the AACR Annual Meeting 2012 and the 2012 ASCO Annual Meeting showed that galeterone was well-tolerated with minimal side effects and demonstrated clinical activity in patients with CRPC.